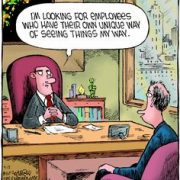 Taking an Unauthorised day of leave.

We are open on the Tuesday between Nelson Anniversary on the Monday and Waitangi Day on the Wednesday. My employee has said he won’t be coming in on the Tuesday but I need him to work. He is a permanent employee who normally works on a Tuesday. What can I say?

Simply say– “No”, however a few extra words will be helpful if your employee still doesn’t come to work on the Tuesday. An explanation along the following lines will enable you to take action subsequently.

“You have not had leave approved for Tuesday so you are required to come to work. If you do not come to work it is likely to lead to disciplinary action which could result in a warning or dismissal. If you call in sick I will require you to visit a doctor and get a medical certificate. You need to be aware that a medical certificate will not necessarily be accepted as an adequate explanation for your absence if I suspect you were not genuinely ill.”

The key to this conversation is the employee understanding the potential consequences of not turning up to work.

We have just introduced a drug testing policy. A manager has told me she overheard an employee (John) say that if he gets tested he won’t pass. What do I say?

Your new Drug and Alcohol Policy will hopefully help you out here. If one of the circumstances for testing an employee is ‘reasonable cause’, the information the manager heard could be considered reasonable cause. Have a discussion with the manager and take a statement about what she overheard, then speak to the person who was having the conversation with John and take a statement. Then speak to John, providing him with the statements, and advising him on the basis of this information you believe you have reasonable cause to test him. Allow him the opportunity to respond to that proposal before confirming whether or not you will test. Then follow your policy in terms of steps to take for testing and consequences of a non negative result.

A migrant worker who was forced to pay her employer a premium to secure herself a job has been awarded $42,813 by the Employment Relations Authority.

Kapilaben Patel was employed as a chef by Curry Pot on Lincoln Ltd for three years from 2011 until mid- 2014.

The ERA found that Patel and her husband had made payments of around $15,000 in return for a job offer with Curry Pot Indian restaurant in Lincoln and assistance and support with a work visa and a residency application. Evidence showed that $5,000 was paid to the Curry Pot Indian restaurant four months before Patel started working there and 11 days before an employment agreement was signed and submitted to Immigration New Zealand.  Patel stated she also paid the directors of the restaurant cash payments.

Patel was awarded $31,413 for unpaid wages, working on public holidays and holiday pay from 2011 until 2014 plus $11,400 in reimbursement for the premium paid to secure her employment.

The company accepted there may be some statutory holiday pay owing to Mrs Patel but disputed all the other amounts claimed. They claimed she did not work all the hours claimed or that she paid them premiums.

“Advances may have been made from Mrs Patel to staff at Curry Pot but these, aside from one payment of $5,000 into the Curry Pot account, were personal in nature and not premium payments and they have nothing to do with Curry Pot” it said.

Christine Boswijk's creative outlet is no longer ceramics but her children no longer have to live in her shadow, and her garden is benefiting.
Scroll to top